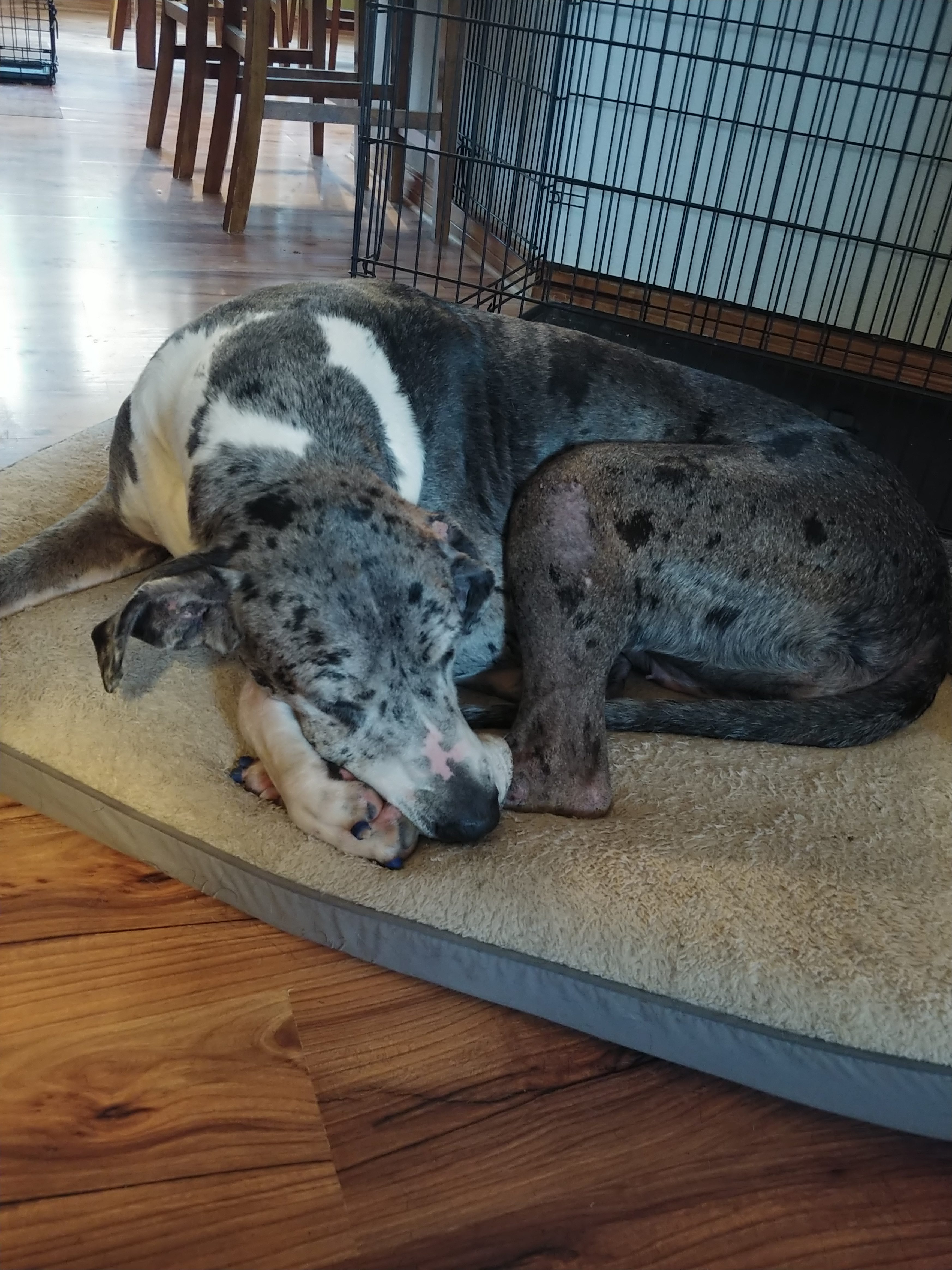 Lucy has come a long way in 10 months. She has gone from a dog that is afraid of visitors to one that is curious and loving with them all, and everbody that meets her falls in love. She has had two incidents with two separate dogs (neither one have been recent). The first was when my daughter came to visit with her Pomeranian (Raina). There was a snarled growl, but it only took a verbal correction to stop. The second was a blue heeler that belongs to a couple of friends that had come to visit. He snapped and lunged at Lucy without being provoked, and she pinned him down. No harm was done, and she was easy to separate from him. Both times she was without her e-collar, and enjoying some “freedom.”

She has also come a long way as far as her health goes. Her leg has healed up, her ears are doing better (although we do have the occassional yeast flare up), and we finally got the sore in the crease of her ear to heal up. I believe the thing that has finally helped the wound to heal up is CBD oil. We both gave it to her to take internally and we applied it directly to the wound. We had been trying for 8 months to get that thing to heal, but within 2 months of beginning to use the oil, the wound had completely closed up. 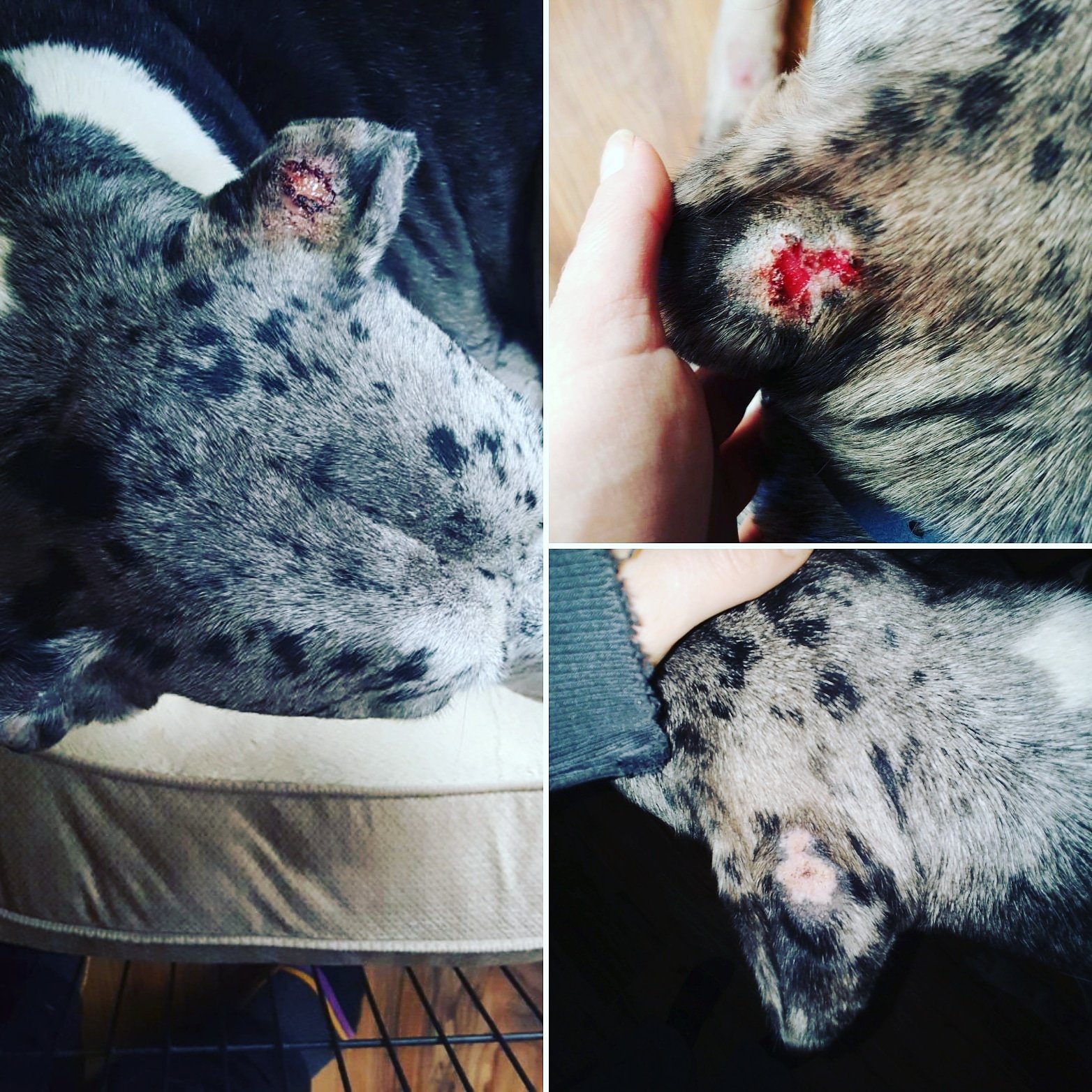 A month previous to this, we had made one more change. We put Lucy on a raw diet. She loves it. She has slimmed up even more, and if she isn’t the perfect weight for her, she’s pretty darn close.

Because many of you have read Lucy’s story and have become part of the Okay Lady family, I feel I can share the sad developments that have come up. Lucy has always had a bit of a limp, but it never seemed like anything serious – not as serious as getting her yeast conditions under control or taking care of the fear and aggression she was dealing with. Within the last week, something has happened. Lucy became weak in her back legs – weak enough to begin falling quite a bit and to be unable to climb onto the chair that she loves so much. We started taking her to the front yard to potty where the porch only has one very low step, and we called a vet to come out to the house (there is no way we can lift her into the truck without hurting her). Yesterday morning, the morning the vet came out, Lucy went out to potty, and as she was taking that step back onto the porch she fell. She has not gotten up since.

During the visit from the vet, we learned that she has arthritis in her toes, she has a wierd hard lump on the inside of her knee (on the joint), and she has a heart murmur. As much work as we have done to help her, she is still a really big mess.

The vet said the reason for the problems she is having with falling could be a few things – arthritis, an injury, bone cancer, or a tumor growing on the underside of her spine causing interference with nerves. She prescribed carprofen. While I am not a fan of pharmaceuticals (I prefer a more natural homeopathic approach), we decided that if pain is truly keeping her from getting up (at this point she had been down for 7 hours) we could begin with the NSAID to get a handle on the pain until the more natural remedies could have time to build up and begin working.

As of the moment I am writing this, it has been 35 hours since she has gotten up or used the bathroom. She has had 3 doses of the Carprofen, she is still chowing down at meal times, and she barks at us for attention when we are sitting together if she is not in the middle of us, but there has been no change.

Early this morning, she managed to drag herself with her front legs off her bed and to the entrance to the hallway. When she got cold, she woke us up by barking. We put a blanket under her and slid her back to her bed where she happily went back to sleep. And this is where she has stayed.

Around noon today, my husband and I tried putting two towels under her – one under her chest and one under her abdomen – as a lift, hoping that if we could get her on her feet that maybe she would try walking with the support. She never even tried. Instead she passed a small amount of stool, but it wasn’t enough to count as a regular daily bowel movement, and she still hasn’t urinated. Another call to the vet to report all of this today, and she said he feels like it has something to do with her lower spine.

We are now to the point of having to think about making that horrible decision. Before we so, we want to know if this is just an injury that might heel without surgery or if this is something that will never get better. We have asked about x-rays and were told to wait until morning to see if there is any improvement at all. She said that if Lucy does not want to try to get up in the morning, she is probably not going to get better.

We have a week’s supply of her medicines, I am still giving her CBD and golden paste. We are not ready to make a decision tomorrow, but we feel like if there is no improvement by the time we run out of her meds we will need to make one.

Your prayers for Lucy and for us as we try to make the best decisions for her would be greatly appreciated.