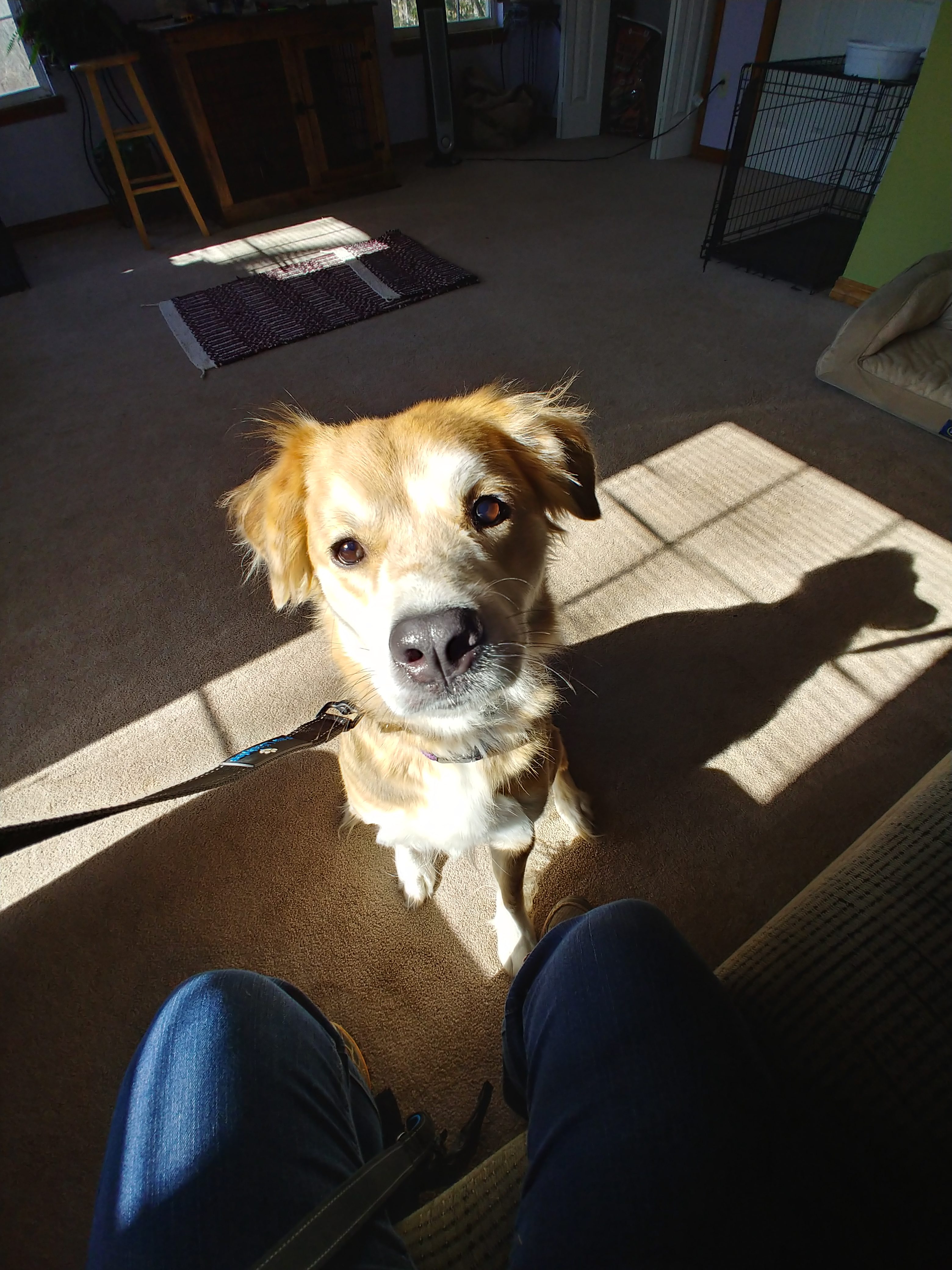 When Annie arrived, I met her and her owner in the driveway. She was barking and nervous about everything. Already knowing that she had high anxiety and fear levels I did my best to avoid eye contact. I had her owners stop short so that Annie could not reach me. I stood with my side towards her to relieve any pressure. She did bark and lunge.

As she began calming down, she was allowed to come closer, and finally began ignoring me. When she was to the point that she was ignoring me, I took the leash and her owners and I parted ways. She followed me towards the house without a problem. When I opened the door, Marvel started barking. She hesitated and decided she was not coming in. I told Marvel to cut it out and went back to the driveway with Annie, leaving the front door open. We walked back towards the house, and instead of going in, we walked past the door and onto the porch, walked a little ways and turned around. This time as we came to the door, I did not have to open the door, there was no pause, so we came right in.

Annie was cautious of everything. She went back to the front door several times wanting to go outside. She had been doing a lot of pulling on the leash, so I decided to go ahead and put a prong collar on her. Why not start teaching her communication? Her attention was on the door, so she was quick to allow me to put the collar on. Once I got it on, I began to do some conditioning. She accepted it initially, but as it began interfering with what she wanted she decided attack the leash. I attached my long leash to the shorter one she had on so I wouldn’t get bitten and worked a little more. She finally began understanding the directional information she was receiving.

Next it was time to get her into a place where she would calm down. She is not crate trained and I wasn’t sure how she would respond to it. She wanted nothing to do with it. I tried using the leash and threading it through the crate to guide her in. She wasn’t having anything to do with that. I tried building a type of shoot to guide her into the crate. She got to the gate, but wouldn’t go through. Since I had her to that point, I opened the side door, threaded the leash through that and called her into the crate. This time it worked like a dream.

I left the room for a couple of hours to give her time to relax. During that time, she only made a noise twice. I expect that to increase as she becomes more comfortable here. When I came back, she was back to growling and barking at me from behind the bars. She was reacting out of fear, without a doubt. As long as that continued, I did not move away. I gave her a quick shot with the pet convincer and stopped immediately. She certainly was not comfortable with me being close to her crate, but she wasn’t acting aggressively toward me. As soon as the barking and growling stopped, I moved away to reward her. As I was training one of the board and trains, I would stop periodically ad approach Annie’s crate. She never offered to growl or bark again, and she actually took a moment to sniff me. (videos below)

When my daughter came home Annie immediately began barking and growling. I had Faith run through the same process I did. She was able to sit beside, but at a distance from her crate but she never made eye contact.

Although she spent most of her day in the crate, I did have to let her in and out to potty a few times throughout the day. I used those opportunities to begin teaching her the Kennel command and to work on crossing thresholds with permission. With the issues she has, working on permission is going to be huge.

She was also very quiet in her crate, but I expect that to change as she becomes more comfortable here.